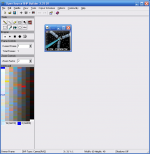 A screenshot of OS SHP Builder

From version 3.35, functionality has been added to edit SHP files saved in the older format used by Tiberian Dawn and Red Alert.

SHP Builder also has the ability to import and export files. Correctly numbered bitmap, JPG or PNG files can be imported as an SHP animation into the program. Likewise, an SHP animation can be exported as a series of image files.

The program can also convert between different palettes, even those used by different games.

The latest public stable version is version 3.37, however an experimental beta version (version 3.38 Beta) has also been released.