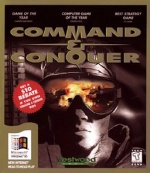 Most of the gaming data is hard coded in the executable and can't be edited.

As most C&C games, it comes with two disks - one for GDI, one for NOD. Westwood Studios did this so that you could play against your friends without having to run out and buy another copy.

Note that "Tiberian Dawn" (sometimes referred to as "Tiberium Dawn") started as an unofficial community name for the first C&C. The game itself was just titled "Command & Conquer". Recently, however, EA Games has referred to Command and Conquer 1 as Tiberian Dawn.