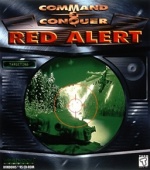 Developed and released by Westwood Studios as a prequel to Tiberian Dawn, Red Alert was significant as an RTS due to its highly enjoyable multiplayer mode and its tense storyline. The soundtrack was yet again composed by Frank Klepacki.

Red Alert has now been released, by EA, for free and is also part of The First Decade.

Two add-on packs were developed for Red Alert, CounterStrike and Aftermath, which were later compiled into a single Play Station 1 game called Retaliation.

The Play Station 1 version included FMV (full motion video) briefings which were not present in the PC variants and the allied briefing officer would become General Carville in RA2.

Due to its success, Red Alert spawned a sequel on its own, Red Alert 2; this game was officially declared "non-canon" by Westwood (under control of EA), i.e. it is not part of the C&C timeline. Given that Red Alert was supposed to a prequel to C&C, this, of course, created major continuity problems, suggesting that Red Alert was in fact not a prequel to Tiberian Dawn. See our unified Cross-pollination of Red Alert and Tiberian series' section below for more on this.

In an interview with Frank Hsu (Yuri's Revenge producer) it was pointed out that "The Tiberian series is an entirely different game and universe" and so the two series do not really belong on the same timeline.

However, it is common knowledge in the community that Red Alert was a prequel to Tiberian Dawn - there was never any attempt by Westwood to hide this, and the player could watch and take part in the historical events leading to the formation of both GDI and the Brotherhood of Nod. It is assumed such statements by the RA2/YR producers were merely an attempt to retcon the history of their game, as they either didn't want to or didn't care to create a story for Red Alert 2 that fit the continuity.

This FAQ was also included in Covert Operations as part of the readme file. Of interesting note is that emphasis was not added. Westwood itself capitalized "prequel". As such, you can safely think of Red Alert as both part of the Tiberian timeline, and part of an independent Red Alert timeline - as long as you remember that Red Alert 2 and Yuri's Revenge are not part of the Tiberian one.

This entire section is saved as a page here and added via include; this is done as it has a valid place on several pages, and should contain the same information everywhere. Please do not hard-write this content directly into pages.

RA's storyline was a lot more "realistic" than RA2's, and considerably darker and more violent. Germany's Bureau of Censorship (BPjM) found the display of Hitler too hard for kids, and cut out the part of the intro showing Hitler. It cuts from Einstein in the chair disappearing directly to Einstein in the chair reappearing. Other cuts and changes included the recurring "It's not humans, it's cyborgs!" theme, meaning that Tanya was declared the only real human on the battlefield and everybody else was just tin cans (an example of this is the replacement of the death cries by weird metal-crush sounds).