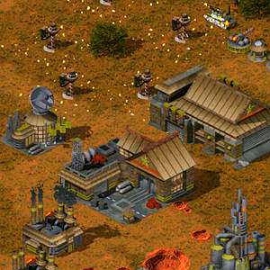 Yuri's Antarctic citadel lies in total ruin. The war-torn Allies now stretch all across Europe, yet remain on the verge of collapse. The dwindling Soviet Empire is reduced to but a handful of Middle Eastern states. But in the Southwest Pacific, the Eastern Sun is rising. China, Korea, and Japan realise that the balance of power is now in their favour, remaining largely unhindered by the war. Using stolen Yuri weapons and their own original technologies, they seek to claim their place among the world powers. To prevent this, the Soviets and Allies launch a premptive strike, before the Asian Alliance is fully mobillised. Thus the battle for the future of Asia, and the world, is joined.

Eagle Red was a mod originally designed for Red Alert 2, with later versions compatible with the expansion pack Yuri's Revenge. The mod designer was Eagle, and co-designed by The Phiend. The mod was best known for the Asian Alliance project, which aimed to design a brand new side with new technologies. As stated by The Phiend, "The Asian Alliance will be a new faction, composed of China, Japan, and Korea. Yuri's technology will be split between the Soviets and the Asian Alliance. The Asian Alliance will also have some new technology". The Asian Alliance was never fully completed, but was released in the 2.0a beta release. Certain units had either no cameo or recycled ones, and there was some borrowing of unit sounds, but the AA was a playable side. The Eagle Red mod had several other public releases, the most popular being v1.5, the last release to support RA2, and v1.8 for YR, the final complete release.

In addition to adding the AA in place of Yuri, the mod replaced some of the existing countries as well. Cuba and Yuri were removed from the game to make way for the Netherlands and China. The final standing of the three sides in 2.0a was the Allies, consisting of America, Britain, Germany, and the Netherlands; the Soviets, which were reduced to Russia, Iraq, and Libya; and the Alliance, which included China, Korea, and Japan.

Some of these countries had their own new country unit. America lost its paratroopers and were given the SR-71 Blackbird. The Blackbird could not be seen on radar, and fired one very powerful missile; one hit would destroy a power plant or tesla reactor. The Netherlands could build the Missile Frigate, a medium armour vessel which could fire a barrage of unguided missiles. It was most useful against coastal defences and installations. The Libyans lost their Demo Truck and got the Terrorist, which could take on the appearance of another unit. Another new unit was the Chinese MLRS-89. It was essentially a lightly armoured ground version of the Missile Frigate, but with lower ROF and greater damage. Korea kept their Black Eagles, but they received a huge attack increase. Japan got the Tsunami Carrier, which launched bio warfare planes called Wasps.

Some criticisms of the Asian Alliance were that they were too difficult to play, and too overpowered late game. The AA had little defence against tank rushes, as their ground forces were horribly weak. However, the AA superweapons were far more powerful than those of the other two sides. The Asian Ion Cannon could easily devastate a medium sized base in a single hit. The Asian Chaos Storm wrecked havoc, especially when used on incoming forces or on base defenders. Perhaps the largest complaint was the ASDF paradrop. The ASDF were essentially Navy SEALS, but with the ability to call in a kamikaze airstrike. The Asian Military Academy was the requirement for recieving them, and thus a priority target when fighting against the AA. This broken unit was never fixed before development halted.