From ModEnc
(Redirected from Marble madness)
Jump to: navigation, search 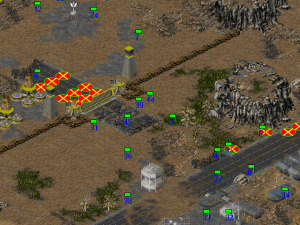 Screenshot of an area in gdi1a.map, the first mission of the GDI campaign in Tiberian Sun, as viewed in FinalSun. 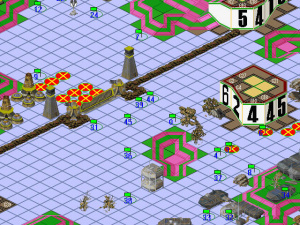 The same area, now viewed in Marble Madness mode.
Marble Madness (MM for short) is the name of a special map editing mode that used to exist in the internal map editors of Tiberian Sun, Red Alert 2, and Yuri's Revenge. Also known as "framework mode", it replaced all tile graphics with simplified, colorful versions, allowing for Westwood's map designers to easily detect errors and correctly line up tiles such as cliffs and shores.

Fortunately for modders, Marble Madness is featured in the unofficial FinalAlert and FinalSun map editors, and works the same way as it would have in the original editor.

How Marble Madness functions is very simple: when enabled, it replaces a tileset with another, as specified by the MarbleMadness flag. Both sets should have similarly shaped tiles and the same amount of tiles for optimal results. However, this effect is purely visual, and the tile information isn't actually modified in IsoMapPack. Once the mode is turned off, the editor returns to displaying the original tile graphics.

Marble Madness mode is named after Marble Madness, an arcade video game published in 1984, which involved controlling a marble in a colorful, isometric 3D environment not unlike its namesake map editing mode in C&C games. 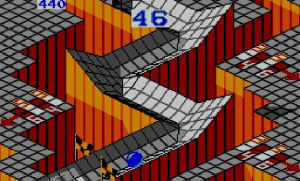