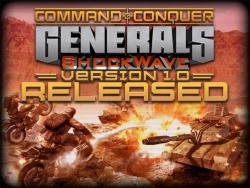 Shockwave is a Command & Conquer Generals: Zero Hour modification that acts as a partial expansion to the game. The mod adds new units and buildings to the generic USA, Chinese, and GLA sides and their subfactions (such as the GLA Camel for General Juhziz, the USA Enforcer Tank for General Alexander, and the Bullfrog for China).

In addition, Shockwave adds generals Ironside and Deathstrike as playable factions and enables General Leang to be playable. Ironside is the USA Armor General, Leang is the Chinese Special Weapons General, and Deathstrike is the GLA Salvage General.

There have been many versions of Command & Conquer Generals Shockwave. Version 1.1 is the latest as of March 16, 2011. Shockwave's Home Page

According to Mod DB, Shockwave is currently rated 9.5, making it one of the best rated Zero Hour modifications. C&C: ShockWave for C&C Generals: Zero Hour