From ModEnc
Jump to: navigation, search
The Third War 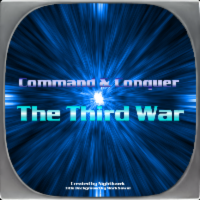 The Third War is a modification for Yuri's Revenge which attempts to continue the storyline of the game after the end of the Allied Campaign. The mod adds several new playable countries to the original three sides, each with their own specific technology. The mod also adds a new side to the game. Known only as the Future Forces, these mysterious time travellers appear to gather their technology from various timelines they've managed to jump into.

Also viewable at The Third War Website
After Yuri's defeat at the hands of the Allied-Soviet Alliance, it seemed like the people could finally get on with their lives, however, not long after the defeat a temporal distortion appeared, covering the entire planet. This was the result of the Allies' time travel and was actually the merging of several different timelines, not two as predicted by Dr. Einstein (in the YR Allied Victory movie).

When the timelines merged, all seemed okay. The Allies and Soviets were still allied with each other, and there was no sign of Yuri's Psychic Dominator network, however, what they didn't realise until the last minute was that during the distortions, the Chrono Prison where Yuri was being held was damaged, and Yuri managed to escape in the chaos. Now he has set up base in the snowy wastelands of Antarctica, while re-establishing contact with his old army back on Crescent Island in the Pacific Ocean.

On his command, the Crescent Army spread out in all directions and took command of several islands near to his own, covering in total about an eighth of the Pacific Ocean. Seeing what caused his army to fail before, Yuri began a massive reorganisation. He split his army into three different legions, each assigned to a different theater of war. A fourth legion would then command the other three from Antarctica.

The Pacific Legion developed aerial units to travel easily across the scattered archipelagos. The Indian Legion expertly trained their infantry in surviving the climatic extremes of the African Savannas, and traversing the mountainous terrain of the Himalayas. With several vehicle functions now in the hands of specialised infantry units, the Indian Legion would be able to deploy containment squads anywhere. The Atlantic Legion worked on their vehicular units to strike swiftly into the heartlands of the Allied Forces, Europe and America, using Yuri's new technique of 'Lightning War'. The Antarctic Legion, Yuri's Command Legion, developed naval units to ensure that Yuri's continent would not be invaded by any means.

What the Allies and Soviets hadn't realised was that while they were away fighting Yuri again, the temporal distortion greatly weakened the surrounding space time continuum. This weakness was exploited by a strange and diverse army, who used it to create a vortex to their timeline by unknown means in North Carolina, USA. Now this army is pouring through the vortex, destroying and capturing all in its wake. Now, it rests with the army commander of the Eastern Seaboard of the United States to help contain and destroy the new foe. Or, you can take up arms as one of the new army's commanders and conquer Earth, changing the future to suit your will.

This mod will take you through time and space in an effort to drive back the futuristic war machine and seal the vortex with new technologies such as the Scout Tank, Anti-Tank Cannons and Commandos, or to conquer Earth and beyond with new and diverse technologies including Ion Cannons, plasma torpedoes, hover tanks and more...