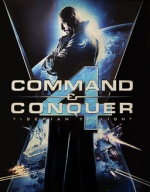 This article or section is a stub. You can help ModEnc by expanding it.

Command & Conquer 4 Tiberian Twilight is the next upcoming title in the C&C series. It will be the final title in the Tiberian series of C&C games, concluding the 15 year story arc. It contains many new gameplay elements previously not seen in a C&C title, such as a population cap ("Command Points"), and an entirely mobile base.

Tiberian Twilight is unique to the Command & Conquer series in that it features a class system. A player can choose one of the following three classes for either GDI or Nod:

In the Offense Class, the player can build mostly vehicles and is given a Crawler that moves on robot legs.

In the Defense Class, the player builds mostly base defenses, infantry, and even super weapons. The player is also given a Crawler that moves on treads.

In the Support Class, the player builds mostly aircraft and uses support powers. The player is also given a Crawler that can fly.

A Crawler builds units and structures inside of itself, allowing the player to create units while moving the Crawler around in vehicle mode. The player can also decommission an existing Crawler and summon a new Crawler at the designated drop zone (which is either red or blue).

Instead of money, the player is given Command Points to restrict creating too many units or buildings on the map. Players are given a small number of buildings and units in the beginning and must fight battles to gain more experience points, eventually gaining a new rank (which expands the player's build set). Players can read about all technologies for GDI and Nod in the Arsenal menu of their Profiles.