This article or section is a stub. You can help ModEnc by expanding it.
Firestorm 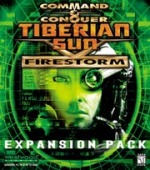 The expansion pack for Tiberian Sun, Firestorm continues the story of the original game with 18 new single player missions(9 for GDI, and 9 for Nod) and more than 30 minutes of live action filmed sequences.

The story picks up after the defeat of Kane at his Cairo Pyramid, and GDI searching through Kane's archives, trying to find out about the Tacitus. After recovering the device and loading it onto the GDI Kodiak, to transport to Tratos for translation, the Kodiak is destroyed in an Ion Storm and crashes, with the Tactius inside. The GDI races to recover the Tacitus, while Nod re-activates CABAL, in an effort to translate the device. CABAL, however, has other plans, and splits from Nod in his own bid for world domination.

The expansion disc adds in a few new(and some cut) features, including new units (GDI's Juggernaut, and the Nod Mobile Stealth Generator, for example.), and some old terrain pieces from Tiberian Sun are re-added in. These include Tiberium plants (Fona), and Tiberium growth (Moss).