YR Launch Base is a program created (and currently under development) by Marshall. The program acts as a 'launching platform' for Yuri's Revenge, Red Alert 2, FinalAlert 2 YR, and any mods for said games. Instead of having a separate mod launcher for each mod (such as the commonly-used XCC Mod Creator), all mods are listed in one central location (and are uncompressed and pre-compiled) allowing the user to quickly browse and select a mod to play. 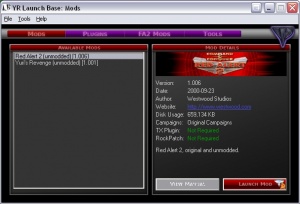 Launch Base (Beta) with standard skin by Renegade

Launch Base handles the installation and uninstallation of the mods, as well as automatically handling mod-specific save games, scripted IPB videos and screenshots, and also tracks RockPatch activities.

The program is also capable of cleaning up your Red Alert 2 game directory prior to launching a mod, and restoring any removed files once the mod is uninstalled. This makes the RA2/YR Clean Up program obsolete.

A prerequisite system is included to check that you have the neccessary versions of the Terrain Expansion and RockPatch, if the mod you select requires them.

Launch Base also handles the installation and uninstallation of 'plugins', such as the Terrain Expansion, RockPatch and map packs.

In order for a mod or plugin to be handled by Launch Base, it must have been created specifically for use in Launch Base using the Launch Base Mod Creator.

Launch Base includes several options to customise the way it works as well as an online 'check-for-updates facility' to allow some mods and plugins to be updated automatically. It does support skins and has a "LiveLog" feature, a window which show log entries immediately after they're added to the log file.

Launch Base is currently in development and will make use of DCoder's mix/bag/csf DLL.