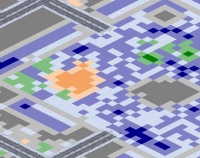 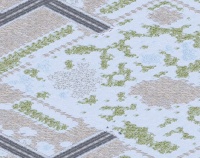 The same tiles after LAT has been applied to it

The IsoMapPack5 section within a map file contains information on location and number of each tile in the map. This information is post-processed by the game by a system know as LAT (the acronym stands for Lookup Adjacent Tile1). The idea of LAT is to provide a smooth transition when different types of tiles are placed next to each other. The image below illustrates the effects of LAT:

Every theater has four types of LAT tiles, internally named GreenTile, PaveTile, RoughTile, and SandTile. Firestorm has a few more: CrystalTile, SwampTile, and BlueMoldTile. We can find the tileset number of these in the General section of the applicable theater's terrain control INI. Also listed in this section are flags indicating the tilesets that provide the smooth transitions between LAT and non-LAT tiles; these flags appear in the simple format of <Terrain_1>To<Terrain_2>Lat. An example, copied from the snow(md).ini theater control file:

LAT tests every tile which belongs to a LAT set on a map, and depending on which of this tile's neighbours do not belong to the same tileset, an image from the corresponding connecting LAT set is picked. This image below further illustrates this: 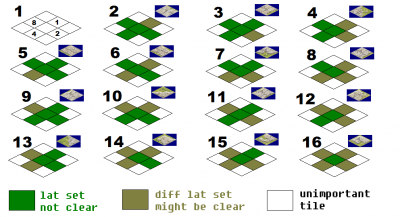 We see here that if we have a tile X, and we assign values 1, 2, 4 and 8 to the top-right, bottom-right, bottom-left and top-left neighbour of X in that order, we can use a bitwise combination of the values of the neighbours which are not of the same set as X to find the used tile number from the set of connecting LAT tiles. Note that "not from the same set" is not entirely accurate. Details on this follow in the following section.

It was mentioned above that if one tile from a LAT set has a tile from a different set next to it, the tile from the LAT set is replaced by one from the connecting LAT set. In most cases this is true, but some TileSets do not seem affected by this. For example, paved roads and pavement tiles do not have a ClearToPave tile to connect each other. The full list of exception is listed in the table below.

TileSets between which no connecting LAT pieces are placed

Notes on the Final Sun and Final Alert 2 AutoLat feature

While the Final Sun and Final Alert 2 map editors have an option named AutoLat listed in the menu, there's not much use to it beyond previewing of what the game's LAT feature will do to your map. This is because the game will recalculate the tiling layer to apply its own LAT feature. Also, the editors are not aware of the TileSets exempted from LAT as explained in the previous section.

An attempt has been made by zzattack to correctly mimic the game's LAT feature in his maps rendering project. Corresponding code can be found here, more specifically in the RecalculateTileSystem function.

1 ↑ According to Joe Bostic, the lead programmer of Tiberian Sun.