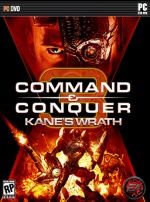 Kane's Wrath also includes a new game mode - Global Domination. This allows the player to take part in a Risk-style conquest of the world. It is loosely based on the War of the Ring mode developed for Battle for Middle Earth II (which uses an earlier SAGE incarnation). The single-player campaign in Kane's Wrath centres around the Brotherhood of Nod, and covers a time period from before the events of Tiberium Wars, then through Tiberium Wars's story, and on into the future.

A Mod SDK has yet to be released for Kane's Wrath, despite pressure from the community. A patch is in development for Kane's Wrath as well, developing concurrently with those for the original Tiberium Wars.

It is currently unknown whether Kane's Wrath will be the only expansion pack for C&C3.

1 ↑ A patch is currently in development for Kane's Wrath.