This article or section is a stub. You can help ModEnc by expanding it.
Tiberium Wars 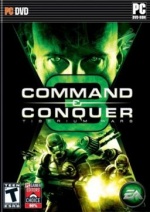 The first logo design for C&C3

Tiberium Wars, or as it's more commonly known: C&C3, is the latest incarnation in the Command & Conquer series. It aims to continue the story from the end of Firestorm. It depicts Earth in a state of both global recovery and collapse. The GDI, who reside in pristine Blue Zones, areas not contaminated by Tiberium, have been using their sonic resonance technology to clear some areas of Tiberium altogether, while the Brotherhood of Nod still run riot in the more decrepit Yellow Zones, which are in a state of economic collapse. The Red Zones are like the face of an alien planet, it is so toxic there that no human being can survive.

The latest logo for C&C3

This game also brings the mysterious Scrin into play. The Scrin were mentioned briefly in Tiberian Sun, most notably where one of their ships crashed onto Earth. The Scrin are supposedly the aliens responsible for the Tiberium infestation, but if they are, what is their purpose? Do they need it to survive? Is it a cornerstone of their economy? Was this all horrible accident? Play the game and find out.

C&C3 also comes, like the previous SAGE game, Battle for Middle Earth II, in a Collector's Edition, known as the Kane Edition. This edition sports a bonus DVD, which contains a behind the scenes documentary, a blooper reel, several strategy videos, and some exclusive wallpapers.

One expansion pack has currently been released - Kane's Wrath. 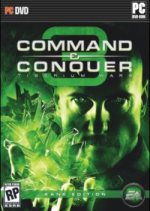 1 ↑ Patch 1.10 was recently in development, though has been sidelined for projects with greater priority