This article or section is a stub. You can help ModEnc by expanding it.
Zero Hour 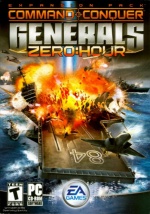 Zero Hour was an expansion pack released a year later for Generals. It added nine 'Generals' to the game, which were originally expected in the vanilla game. The nine added personae were:

Players could progress through a new 'Generals Challenge' campaign, in which they picked one of the nine general personas, and face off against six of the other Generals before facing off against the 'Boss General', General Leang. General Leang is not playable, but there are modifications that enable her for the player's use, like Shockwave, Pro:Gen, and others located at GameSpot, FileFront and CnC Guild. Both General Fai and General Juhziz did not come with Challenge maps, however Juhziz's map is still located in the game files, albeit in a slightly unfinished state.

A note about Zero Hour updates: Patches 1.03 and 1.04 are known to disable the Ultimate Honor award; when all skirmish maps are beaten on the max number of brutal AI, the award is not granted. The player must rely on patches 1.01 or 1.02, or better yet, not patching the game, to earn the Ultimate Honor.

There are several command line arguments that can be applied to a shortcut to the Zero Hour EXE.