Yuri's Revenge and other games based on the TS engine have at least two distinct systems of direction: A simple, and a fine-grained system. The simple system(s) are used for SHPs, due to their practically limited facing, while the finer-grained system is used for voxel-based units.

In the simple system, 8 facings of animation are used for the 8 facings of the compass, with 0/first signifying North, and North being at the top edge of the screen.
This system is used for Anim on WeaponTypes, as well as for animations used for fire ParticleSystems. (Although fire systems only use 4 facings and re-use them on the opposite direction.)

This system is used on flags such as PoseDir, where the possible values range from 0-255, giving more control over where a unit should face. Internally, judging from one of the comments, this seems to be converted to a so-called "FacingType". 0 is North, North being the top right-hand corner of the screen. The resulting compass looks like this: 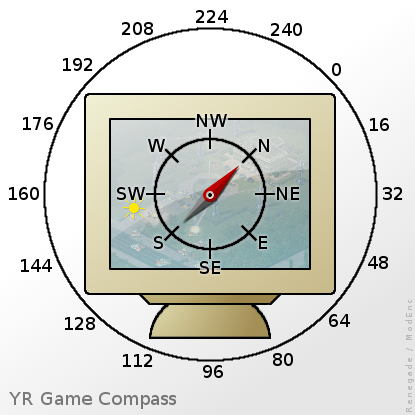 Please note that, while PoseDir is used when an aircraft is created, once it departed, returned, and connects to the landing pad, it will align with the building's facing, i.e. North.
Also note how the (original) usage instructions of 1=NE, 2=E on PoseDir are wrong.

Indicators for Top-Right being North

Despite contradicting compassing on SHPs, from the comments inside Rules(md).ini is is quite evident that top right is indeed North, not just for voxel purposes, but in general.

Aircraft built with PoseDir=0 point to the top-right corner of the screen. (Comments for PoseDir clearly identify 0 as North.)

CAPARK04 faces top-right and is commented...

With Refineries and Repair Depots, it is evident that the count of impassable starts from the top left; NumberImpassableRows is commented:

If we know NumberImpassableRows counts from top left, and top left is designated as West, top right must be North.