This article or section is a stub. You can help ModEnc by expanding it.
Generals 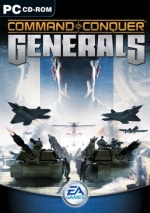 Generals was the first EA-only C&C, as Westwood had been consolidated into EA Los Angeles (EALA). Generals too, like Renegade, was a radical departure from the storylines of both the Red Alert universe and the Tiberian Universe. Generals was set in a modern warfare-type situation, around the late 2010s. Generals depicted the battle between the United States of America, the People's Republic of China and the Global Liberation Army, a terrorist organisation. Generals had three linked campaigns, unlike the previous games, which had several campaigns with different endings. Generals proved to be a very unpopular game with C&C fans, as it deviated away from most of the original gameplay aspects of C&C, such as the sidebar interface, the Construction Yard system and the unit control systems. It was however used as a very powerful base for modders, as its programming freedom was much more diverse than Red Alert 2, though it was much more complicated for new modders to learn, being based on a completely new engine, known as SAGE.

Generals also caused a lot of controversy in the real People's Republic of China, it was banned not long after its release, because, even though China had a positive portrayal in Generals, the game showed them with a very liberal use of their nuclear arsenal, though it was mostly restricted to their low-yield tactical nuclear warheads.