From ModEnc
Jump to: navigation, search
This page is about the game, Command & Conquer: Renegade. For the administrator of this website, see User:Renegade
Renegade 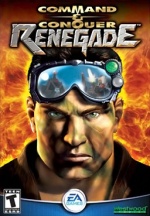 A departure from the RTS Genre associated with Command & Conquer, Renegade was a First Person Shooter set between Tiberian Dawn and Tiberian Sun. It was greeted with a lot less fan appraisal then its predecessors. Renegade distorted the storyline in many ways, especially in the visuals. For example, the Nod light tanks in Renegade are not M2-Bradleys like in Tiberian Dawn, and do not use the urban camouflage fatigues associated with Nod. The game takes place from the point of view of Havoc, a GDI commando, in the closing hours of the First Tiberian War. The game is unique in that it not only allows for control of a soldier, but it allows for controlling of vehicles and aircraft. It also allows departure from buildings into the open air environment without loading screens.

Dispite the weird singleplayer campaign, the game garnished an immense multiplayer following for its unique gameplay. The following has dwindled since 2003, but it is still popular, with a large modding community.

In its early conception(1999, at the closing of Tiberian Sun's development.), Renegade was known as Commando, and was planned to be moreso a stealth game, like the Metal Gear Solid series, set in the Tiberian universe. Early screenshots were a stark contrast from the final game. Notably in the arts category. However, the multiplayer concept was still the same.

Renegade's modding community still thrives, and has three 'big' mods, two of which (A Path Beyond, and Reborn) have gained support from Electronic Arts, and are avalible for free as standalone games. The third, Red Alert 2, Apocalypse Rising, is still in development.

A Path Beyond & Apocalpyse Rising site