From ModEnc
(Redirected from RA2)
Jump to: navigation, search

This article or section is a stub. You can help ModEnc by expanding it.
Red Alert 2 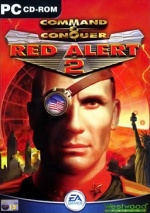 Red Alert 2 is the sequel to the game Red Alert, though it has been officially designated as non-canon by Electronic Arts. Its story, though continuing straight on from Red Alert's Allied campaign, makes no mention of GDI and instead has a puppet Soviet ruler called Romanov who has been installed by the Allies, who, though an aristocrat and a member of the communist party (which is actually an oxymoron), was an advocate of peace. Ever since an artificially psychic Yuri became his chief advisor, his relations with the US have deteriorated, and some signs have shown he is not acting in good faith. After he attacks America, President Dugan orders a full-scale retaliation, which fails because Yuri remotely disables the ICBM silos. RA2 has a more funny and cinematic style compared to its prequel and Tiberian Sun, but also better FMV acting. It has an expansion pack, Yuri's Revenge. Though it uses the TS engine, several logics have been removed from it, and others added.

All cheat codes must be entered in main menu screen.
If you input it correctly, you will hear a beep.

The following switches can be applied to ra2.exe from a command line to achieve certain functionalities:

There will be a number written in the top left corner while ingame, it is not known what it represents. : Also, there will be two new key assignment functions under Options - Keyboard in the Debug option:
Multiplayer Debug Info, pressing the assigned key in-game will toggle the output of extra Multiplayer Debug status to the screen.
Game Sync logging, toggles the logging of multiplayer info files (this seems to be responsible for the SYNC*.txt file writing, which are created by default in all multiplay games).

-noaudio
Switches all audio off (useful for players with sound card issues)
-nostr
Starts the game without reading the .CSF file, see FATAL Error.
Note: Doesn't do anything on Yuri's Revenge.

-str
As above but the game will read the .CSF file (default)
(How is this testable?)
-record
Creates a game movie file (defaults to SESSION.IPB) in the Red Alert 2 directory1
-play [filename]
Plays a game movie file (IPB format)
-CDpath:to/c.d
Specifies the location of the CD-ROM from which to run the game. Should contain the YR1.dsk file with at least 3 bytes of content.
-ATTRACT
Old version of -play. This caused DOS C&C1 to load a game recording from the file RECORD.BIN and play it out on the game's first multiplayer map, Green Acres. The demo starts after the game is left untouched on the main menu for one minute. The recording included in C&C1 is damaged though, causing the game to crash after a while. The automatically-playing Dune II demo is an example of the same system in action. This parameter is probably obsolete in RA2.
-DESTNET
Destination network address (IP format, nn.nn.nn.nn)
-SOCKET
Specifies a network socket number (between 0 and 16383)
-DROP=[int]
Packet Loss Simulation mode enabled
-SPEEDCONTROL
Allows changing game speed in campaign mode (when you pause the game, the Game Speed slider in Game Controls window will be visible). Normally it is only possible for non-campaign modes.
-DLINK
Enable additional D-Link logic (helps with D-Link based LAN configurations)
-NETGEAR
Enable additional NetGear logic (helps with NetGear based LAN configurations)
-STEALTH
Hides players names in multiplayer LAN and Internet games
-MESSAGES
Allows incoming messages from outside the game (WOL)
widthXheight
Runs the game with the specified resolution (e.g. 1024X768)
This doesn't seem to work anymore, as it is overridden by the ScreenWidth/ScreenHeight statements in ra2(md).ini (which in itself is overridden by the Yuri's Revenge shell screen, which is hardcoded to 800x600).

-480
Sets the screen height to 480px
-16
Forces 16-bit color mode
-WIN
Runs the game in a window (as opposed to full screen)2
-jabber
Disables reading of the .CSF file, see FATAL Error.
Note: Doesn't do anything on Yuri's Revenge.

possibly used to load CSF files with Language set to "Jabberwockie".
GrabPatches
Launches the game and gets it only to check for an updated version (patch)
Note: Doesn't do anything on Yuri's Revenge.

These might work in earlier games, but are obsolete in RA2:

1 ↑ Note that these aren't movies per se, but rather re-enactments of the battle. Therefore, any change to the game between the recording and playing of the "movie" file will damage it in unforseeable ways. e.g. if you recorded yourself how you destroyed a base with five Grizzlies, then made buildings immune to damage, and then played the recorded movie, the Grizzlies in it couldn't destroy the building and the actions on screen would make no sense at all.

2 ↑ Your current video mode must have 16-bit color.