From ModEnc
(Redirected from YR)
Jump to: navigation, search

This article or section is a stub. You can help ModEnc by expanding it.
Yuri's Revenge 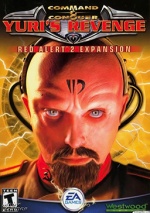 Yuri's Revenge (YR) is the 2001 add-on to Westwood's Red Alert 2. It added a third side (the followers of Yuri), several new units for the existing sides, and two new single player campaigns.

At this point in time, there are comparatively few mods left for the original game, most new mods are for Yuri's Revenge.
Most files in YR that were present in RA2 as well had the suffix "md" added (Mission Disk), e.g. while RA2 had the rules.ini as its main control file, YR has the rulesmd.ini. In the case of INI files, these are complete replacements, not just overrides to the original ones.

These work in addition to the RA2 ones, with the new EXE being ra2md.exe.

-DLINK1
Unknown but related to Network options
-SPEEDCONTROL
Allows changing game speed in campaign mode (when you pause the game, the Game Speed slider in Game Controls window will be visible). Normally it is only possible for non-campaign modes.

-CD
Allows the game to run without the Yuri’s Revenge CD. Requires the content of the Yuri’s Revenge CD to be copied to the Red Alert 2 directory first. The First Decade users already have all the required files installed, so no further action has to be taken.
-NOLOGO
Prevents the EA logo video from playing before the game begins to load.
-LOG
Turns debug.log file writing on initially. See Internal Errors/Debugging.
-LOG-CSF
Outputs all CSF labels that cannot be found in the language files into debug.log. Each label is written only once, and prefixed with [CSFLoader].
-STRICT
Throws an Internal Error on game load if a not-necessarily-critical error is detected. For example, when you set a flag to a non-empty value that cannot be parsed.

Note
There are several existing errors in the stock rules that will trip this so you will need to clean them up before using it.

Warning
This feature was designed primarily for the purposes of offline testing and AI design testing. Due to this, feature complexity, lack of interest and a change in personnel, please note that this feature is NOT officially supported.

Warning
Several bits can be combined, like 3 representing the first two processors. Usually, the game should run on only one processor (that is, N being a power of 2), as it is not designed to make use of multiple processors.