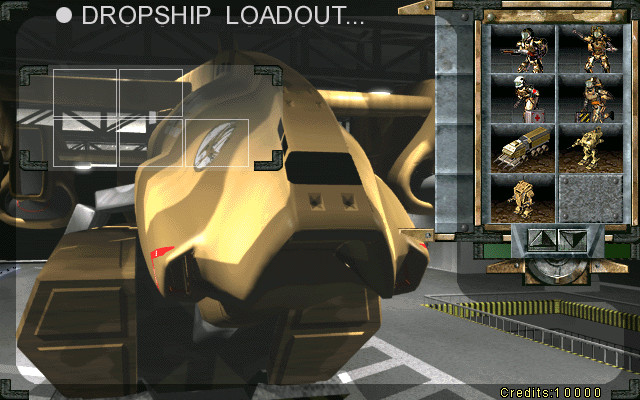 Example of what the Dropship loadout looks like in Tiberian Sun.

The dropship loadout is a feature that was cut from Tiberian Sun late in its development and presists in a somewhat buggy form in RA2 and YR. In TS, the feature was to present the player with a screen where he could purchase units that would be delivered to him as a scripted reinforcement during the mission that followed. The feature can be made to work almost perfectly for single player missions. Note the bugs section below.

The loadout feature can also be set on multiplayer maps, causing all players to get the chance to select units, irrespective of their side actually having a suitable reinforcement trigger or not. Note that the game will time-out if any player is delayed at the screen.

To access the loadout screen prior to a mission, the map file must have [Basic]→StartingDropships= specified. The value for the flag must be either 1, 2 or 3 and specifies how many dropships the player will be able to specify the contents of. To actually recieve the reinforcements, there must be a reinforcement trigger that creates a team with only a Dropship unit in the taskforce. The transport will automatically be filled with the units ordered.

The player can be limited in several ways as to what they can buy. First of all, they are limited to units that have the player house/country set in the units' Owner entry. In RA2, the loadout ignores RequiredHouses, ForbiddenHouses, and RequiresStolenXTech. There are controls available that can adjust what the player can and cannot purchase as a reinforcement however, as well as how many of each unit. Both of these controls are specified in a map's [Basic] section as well. AllowableUnits specifies what units are available to purchase using a comma-separated list and is based on the unit section names from rules(md).ini. AllowableUnitMaximums is another comma-separated list that has the same number of entries as AllowableUnits and sets the number of each unit that is allowed to be purchased (-1 gives unlimited). The tech level of the player house/country will also limit what can be purchased unless overriden with AllowableUnits. The amount of credit available to buy units is the amount set to be available for the player house, if no credit is available it seems to give an IE when you exit the screen (in RA2 at least).

Bugs in all applicable games

Bugs in RA2 and YR only