Warning: setting this to values over 11 will cause Internal Errors when the warhead is supposed to detonate.

CellSpread defines the blast radius of a warhead. Without CellSpread, a warhead only affects the cell it impacts on. With CellSpread, the damage extends beyond the current cell (it spreads), to the distance set through CellSpread. 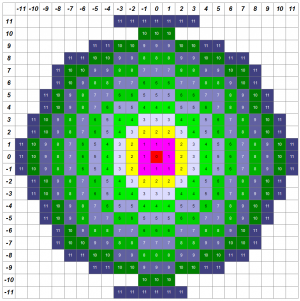 For a quick, simple understanding of CellSpread, simply view it as follows: The damage will extend beyond the impact cell for as many cells as CellSpread is set to. e.g. if you set CellSpread to 3, the warhead will damage the current cell, and 3 cells further into all directions. A circle around the impact cell with a radius of 3, for a diameter of 6.
The image to the right reflects which cells are affected by which CellSpread under this simple model of CellSpread. 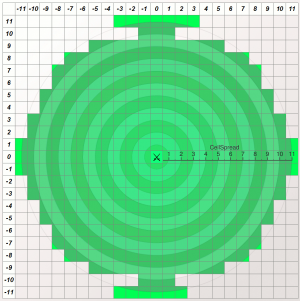 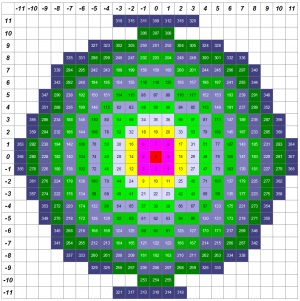 Order in which potential CellSpread-affected cells are scanned.

In reality, the game's parsing of CellSpread is performed slightly differently:

The practical difference to the traditional view of CellSpread is mostly the handling of "diagonal" damage. As visible in the image in the section above, the traditional model assumes the corner cells to belong to the next-higher cell spread, when, in reality, the map's cells are irrelevant in the distance calculation. That means that damage does indeed spread in a perfect sphere radius, making working with it a lot easier.
In addition, as visible in the visual representation, since the damage spreads in leptons from the point of impact, rather than in cells from the cell of impact, the cells in the outer-most ring of a given damage area are not affected completely when using integer values; e.g. a CellSpread of 1 does not actually damage the entirety of the first cell next to the target, but only half of it. In order to damage the entire next cell, one would have to choose a value of roughly 1.5.
Furthermore, since InfantryTypes can stand in various places inside a cell, if they are hit by CellSpread-warheads, the point from which the game calculates the distance to determine whether an object is affected by the CellSpread is not necessarily the center of the impacted cell, potentially changing the affected parts of the outer ring again.

The distance itself is calculated in all three dimensions, meaning a flying unit can be affected by CellSpread in the same way all other units can. Note that the flying units within the affected cells can be damaged at higher altitudes than one would expect, but that doesn't mean the flyers in the neighbouring cells are affected.

Purely for reference, here's the table used for CellSpread.

Ares replaces the lookup table and makes it possible to use larger values for CellSpread. All area of effect weapon features Ares added (like AttachEffects on Warheads, EMP, IronCurtain on Weapons) have been updated to support this as well.